The test taker speaks quite fluently and gives appropriate and extended responses. She makes good use of a range of markers and linking words (first; actually; I think so; for example; in a lot of ways; that's why). There is some hesitation, but it is mainly content-related as she seeks to clarify her ideas before expressing them. Coherence is not affected by these slight pauses.

Vocabulary is a strong feature of her performance and she uses a wide range, including some less common, idiomatic and colloquial items (lose your privacy; selling their soul to the devil; getting dumped; it depends on the target; we need a rest from the serious stuff). However, there are also a few examples of error and inappropriate word use (a small news; end of the relax evening; free dresses).

Her grammar displays a good range of both simple and complex structures that are used flexibly and a number of her sentences are error-free. However, there are some noticeable errors in areas such as articles, prepositions, subject/verb agreement and verb tense (if someone recognise you; if people follows; you will like them fail; it won't be happen like this).

Although she has a noticeable accent, her pronunciation is generally clear and easy to follow. Stress and intonation are used well to enhance meaning (You don't have to pay for a lot of stuff. They will give free dresses and free stays in the hotels). She has a tendency to use syllable-timing, which prevents her sustaining appropriate rhythm over longer utterances. She also has occasional problems with sounds (jung for 'young'), but this has only minimal effect of intelligibility.

This test taker only just achieves Band 7, owing to a weaker performance in grammar. 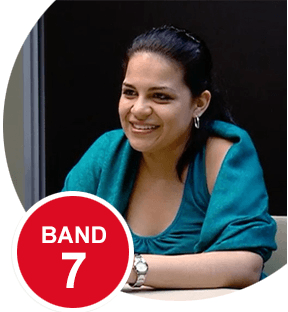