This test taker is able to maintain the flow of speech for most of the time but there are hesitations as well as some repetition and self-correction. This, together with the fact that she describes several interests rather than one interest, makes her hard to follow at times and leads to some loss of coherence (before when I live in Vietnam I often go to ... church or some association ... er ...I can ... er ...I often ask my friend to ... er ... contribute ... er ... er ... and give a hand to help the poor people ...or the old people because I think the old people are so ... er ... my ... is look like my grandparents so I want to take good care for them.) She can use markers accurately but within a narrow range (first; so; because; as well; in the future). Her rather limited range of vocabulary is just adequate for this part of the test. She manages to talk at some length about these familiar topics and produces some good items (widen my knowledge; to overcome or try to get over the problem; contribute; take good care). She makes some errors in usage (do volunteers).

She uses a narrow range of sentence patterns, but there are a few instances of 'if' and 'when' clauses. She produces basic structures with reasonable accuracy but verb tense errors and omissions are frequent (I can shopping; before when I live in Vietnam I often go...; in picnic; I enjoy with it).

She has quite a strong accent with a number of poorly formed sounds and systematic omission of word endings (lee a han for 'lend a hand'). Rhythm is often syllable-timed and utterances are sometimes delivered too rapidly, which causes some difficulty for the listener.

Despite this test taker's ability to keep going throughout her long turn, her grammatical limitations and pronunciation problems restrict her rating to Band 5. 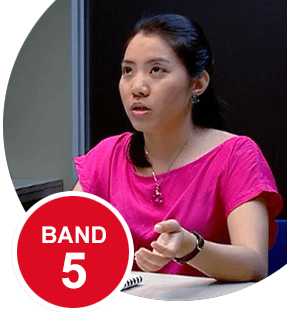