How should the CEFR be used by recognising institutions wishing to set language ability requirements?

Test users may find the Council of Europe’s Common European Framework of Reference for Languages (CEFR) helpful. The framework is a series of descriptions of abilities at different learning levels that can be applied to any language. It can provide a starting point for interpreting and comparing different language qualifications and is increasingly used as a way of benchmarking language ability around the world. 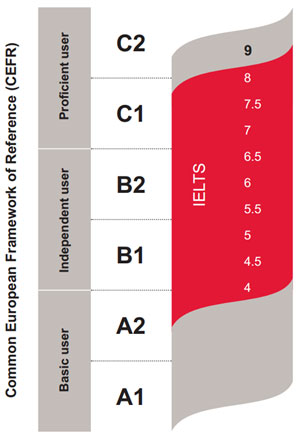 IELTS and the CEFR

In fulfilling its purpose as a common reference tool, the CEFR was not designed to provide the basis for precise equating, nor was it intended to be a prescriptive tool to impose standardised solutions. Rather it was designed as a common framework of reference, primarily intended as ‘a tool for reflection, communications and empowerment’, as described by John Trim, its co-ordinating author (Saville, N 2005).

Therefore, we would recommend that all recognising institutions should look at the IELTS band score descriptors and use the IELTS Scores Guide DVD to ascertain the appropriate level of language ability required for their institution or course.

Making comparisons between scores on different tests is challenging because many of the current range of test products differ in their design, purpose, and format (Taylor, 2004a). Test takers' aptitude and preparation for a particular type of test may also vary and individual test takers or groups of test takers may perform better in certain tests than in others.

Specifying the relationship between a test product and the CEFR is challenging because, in order to function as a framework, the CEFR is deliberately underspecified (Davidson & Fulcher, 2007; Milanovic, 2009; Weir, 2005). Establishing the relationship is also not a one-off activity, but rather involves the accumulation of evidence over time (e.g. it needs to be shown that test quality and standards are maintained).

Cambridge Assessment English has been working since the 1990s to refine its understanding of the relationship between its different assessment products, including IELTS, and the CEFR. The relationship of IELTS with the CEFR is complex as IELTS is not a level-based test, but rather designed to span a much broader proficiency continuum. It also utilises a different 9-point band scoring system; thus, there will not be a one-to-one correspondence between IELTS scores and CEFR levels. It is important to bear in mind the differences in test purpose, test format, test populations, and measurement scales when seeking to make comparisons.

With the above in mind, Cambridge Assessment English has conducted a number of research projects since the late 1990s to explore how IELTS band scores align with the CEFR levels. A number of these were summarised in Taylor (2004b), while cautioning that, “As we grow in our understanding of the relationship between IELTS and the CEFR levels, so the frame of reference may need to be revised accordingly.

Note that the IELTS band scores referred to in the figure are the overall band scores, not the individual module band scores for Listening, Reading, Writing and Speaking. It is important to recognise that the purpose of this figure is to communicate the relationship between IELTS and the CEFR. They should not be interpreted as reflecting strong claims about exact equivalence between assessment products or the scores they generate, for the reasons given in Taylor (2004a).

The current alignment is based upon a growing body of internal and external research, some of which has also appeared in peer-reviewed academic journals, attesting to their quality (e.g. Hawkey & Barker, 2004; Lim, Geranpayeh, Khalifa & Buckendahl, 2013). This research has been further combined with long established experience of test use within education and society, as well as feedback from a range of stakeholders regarding the uses of test results for particular purposes.

As further work, such as that being undertaken in the English Profile project, enriches our understanding of the CEFR levels, further refinements may be possible.

Questions about IELTS and the CEFR

1. Has the IELTS test changed?

No, the test has not been changed.

2. Why is IELTS changing the way the band scores relate to the CEFR?

We have always been committed to providing ongoing revision as we grow in our understanding of the relationship between IELTS, other examinations and the CEFR levels.

The CEFR is becoming more prominent in how institutions consider language ability requirements. It is important therefore that we provide updated advice as to how to interpret IELTS scores in CEFR terms. The table previously on the website did not show half-band scores, and predated the introduction of half-band reporting for Writing and Speaking in July 2007.

3. Has IELTS been made more difficult?

No the test has not changed. The way it is examined and the way band scores are awarded remain the same.

4. Should institutions and organisations which use IELTS scores change the band scores they expect students to achieve as a result of the revised CEFR mapping?

The test has not changed and the performance represented by each band score remains the same. The IELTS Scores Explained DVD provides samples of those performances so that institutions can judge what level is appropriate to their needs. There is no need for institutions to make changes where they have previously been satisfied with their particular score requirements.

5. Some IELTS band scores are shown as borderline (e.g. it is not clear whether band 5 is B1 or B2). How should institutions and organisations interpret this?

As IELTS preceded the CEFR, IELTS band scores have never aligned exactly with the CEFR transition points. The new table makes this clearer. Previously we provided advice as to the score on IELTS that a test taker who was at a given CEFR level might achieve. However, our research shows that a C1 minimum threshold would fall between the 6.5 and 7 bands on the IELTS scale. Therefore, whilst many 6.5 test takers would be at C1, a number will be marginally below. So if an institution requires a high degree of confidence that an applicant is at C1, they may wish to set a requirement of 7, rather than 6.5.

6. Does IELTS differentiate at C2 level?

Band scores of 8.5 and higher are recognised as C2. Band 8 is borderline.

7. If a student already has an IELTS score of 6.5, shown as C1 in the previous mapping, should this now be treated as a B2 equivalent score?

The score 6.5 is borderline B2/C1. The real-world level of performance represented by the result has not changed. It is for institutions to decide whether they wish to change their requirements, if alignment to a particular level of the CEFR is critical (see response to q5 above). The advice in the IELTS Guide for Educational Institutions as to probable levels required for different types of course still holds.

9. What is the research behind these new mappings?

This is a response to the increased prominence of the CEFR in how institutions consider language ability requirements, rather than the findings of a particular research project. The new presentation draws on the previous evidence, on benchmarking exercises conducted in 2009, and on studies of the performance of test takers for other Cambridge English exams at B2 and C1 level on IELTS-type materials in 2009 and 2010.

10. How does this compare to the mappings that other language testers have published?

We do not comment on the benchmarking exercises that other language testers have provided. 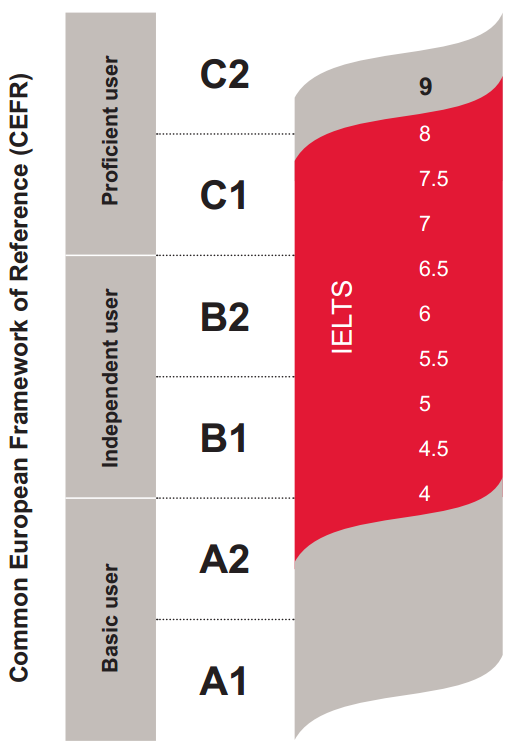